Can’t lose him, can’t let him get away with my phone, Brandon kept telling himself in a frantic rhythm with his footfalls. The kid was way ahead of him now, weaving in and out of colorful flashes of blinding neon lights. More than once he thought he’d lost sight of him just to catch a glimpse around yet another bend in this maze of underground clubs and bars.

He had no idea where he was or if this place even existed in the real world. Had he fallen into a hole in the ground? Was there a giant rabbit waiting for him somewhere? The kid was mocking him now, glancing enticingly over his shoulders now and then, waving Brandon’s phone in the air like the trophy in a crazy, dreamlike rally.

Brandon was breathing heavily and the kid must have sensed it for he winked and slipped around yet another corner. Brandon mustered up his last bit of strength, raced after him — and skidded to a stuttering halt.

A deadly beat came booming at him through huge power amplifiers on a brightly lit stage. A crowd of people, yelling, singing and dancing added to the clamour and confusion. Brandon yanked up his arms, covering his ears with one and his eyes with the other. This place was a living hell!

But where was the thief? Brandon craned his neck, but with all these people smothering him, shoving him this way and that, he had finally lost the scent of him. He let out a frustrated groan, a headache building behind his eyes, when suddenly he caught sight of Luigi-Carlos-whatever!

There he was, up on the stage, and next to him Brandon spotted the woman from the garage, the one from the bar, Luigi’s pilot Nat, also Karima and Dale, two of his shady business partners — and then he locked eyes with the thief, holding up Brandon’s cell as if to dare him: ›Come and get it if you can!‹

Brandon pressed forward, trying to push through the crowd, when suddenly he lost ground! People were grabbing him by his arms and legs, shoving him upwards, handing him over to others, and then he felt himself surfing over peoples heads like a rock star. It was insane!

»Brandon my man, come on up!« Luigi-Carlos-whatever boomed over all the ruckus, beaming at him brightly and weaving a bright orange pumkin bucket: »Get the party started!«

And then the whole place erupted:
»Trick or TREEEAT!« 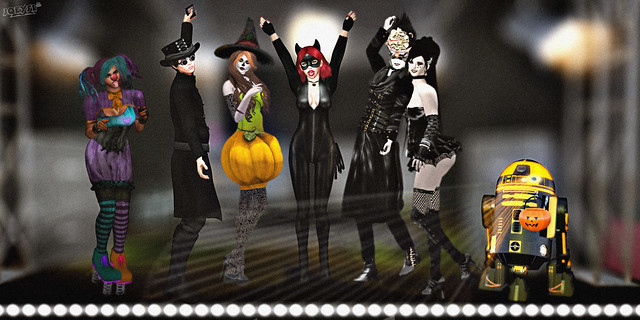 Thanks so much to my amazing models (right-to-left): Ito Naminosaki, Dale Innis, Karima Hoisan and Natascha Randt. (The avatars on the very left: yours truly 😀 )

5 thoughts on “In A Heartbeat”